I had a really nice, long weekend. My live sale went well on Friday, then I spent a large portion of Saturday working on shipping and related things, but Saturday night I went to a quarter auction to benefit my nephew, Austin. He's fighting cancer (and winning!) and it was a fundraiser to help with bills. So basically in a quarter auction you buy (rent) your paddles and they have numbers on them. With each auction lot they tell you how many quarters you need to bid per paddle. You can play one or all of your paddles and so on. I bid on most of the lots, just to support the fundraising efforts. It was fun and got silly at times. They have a bag full of chips with the same numbers as the paddle and if they draw your number, you win the auction lot. Which means you can with stuff for as little as 25 cents. I chose to play only one of my paddles for a wine basket full of cookies. They of course drew the number I did not play, lol! But I did win a big basket of cleaning stuff. And even after giving some stuff to Sarah and Amanda, I had lots left. I would definitely go to a quarter auction again. You don't necessarily have to spend a lot of money to win some pretty cool things. I also won a raffle for a bracelet I wanted. It was definitely a good night. Plus I got to see some people I really love. 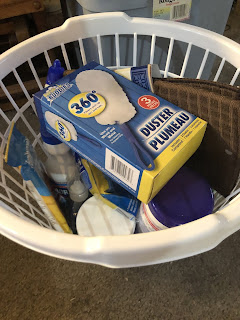 Sunday I got to see another person I love. I was on a mission to buy a new tablet, since there were tons of sales on iPads. Super sales that made them just about the same price I paid for my nook Tablet years ago. But that tablet is dying. So I decided to head out in Crystal's direction and pick her up so we could do a bit of shopping. I think it's cool that we are both wearing "fur". I actually fell in love with a black faux fur coat at Target. It was the softest fake fur I have ever felt! I just wanted to buy it so I could pet it! But I did not need a $70 coat when I already own a couple of winter coats. I also didn't need it for a Cyber Monday deal for $42... though that was harder to resist. 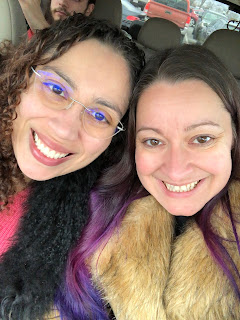 We ended up in a couple of different stores, but I saw these pjs at Target and snapped a picture to post on Facebook. I figured I likely knew some people who would be into unicorns wearing sweaters! They are pretty cute. 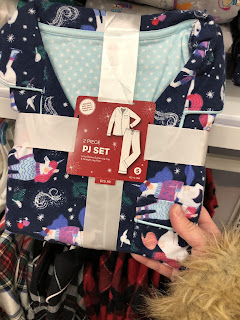 I knew that snow was coming, and the sky looked like it was true, so mid-afternoon I dropped Crystal off and headed home. My car can make it through any amount of snow. I have easily gone through about 2 feet. I love my car. I don't love driving behind sanding trucks. They are very slow. So the trip home took a lot longer than it should have. 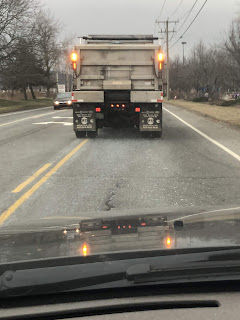 We were going slow enough I had time to get a picture of the open fields and mountains in the distance. 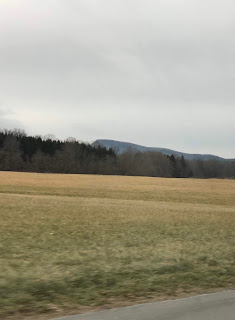 And an artsy photo of my car's doppelganger behind me. I thought the rearview photo was kind of cool. Seriously, we were going insanely slow and I was stuck behind that truck for awhile. 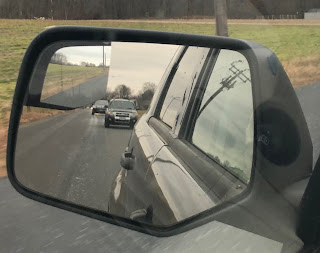 It started to snow when we were almost home and I got this photo out my bedroom window before it got dark. 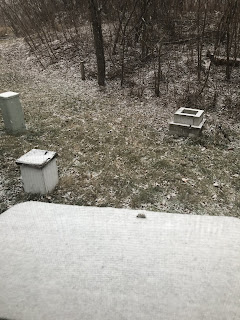 And I got this one yesterday morning when I got up. We definitely got some snow. There was also a lot of freezing rain. It made everything super heavy. 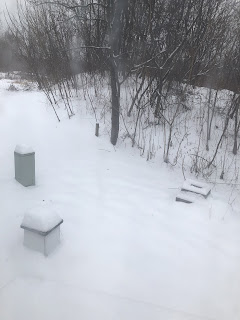 They canceled school for Monday, Sunday night, so I didn't even have to get up early. Which was great. I did have to shovel and I had to go out and get more salt for the driveway. I also did a ton of cleaning and I made a showmanship doll. I went to the post office and shipped a couple of bags of packages. I am digging out from my live sale. There has got to be a better way to do the sorting, packing and shipping. This will take some thinking about.
As of right now, we are still waiting to see if school will be delayed or canceled for today. I had 5 (and a half) days off so I guess it would not be horrible to go back. But I have had 5 (and a half) days off, what's one more?

I love that you are now taking selfies with your bestie. Friendships likes yours should be documented~ <3

Jennifer, I completely agree! Crystal and I have been friends for more than half our lives and we had a handful of pictures together. We make a point to get at least one every time we get together now. They make me happy :)