The Aftermath of the Storm, Dolls and The Giving Tree

We are still cleaning up from the second storm, or the continued storm, however you want to look at it. Sunday night we got probably 6"-8" of snow and then freezing rain all night and for a lot of the morning. That stuff was HEAVY to shovel. Then, without ever really stopping, Tuesday night dumped another 12'-16" of snow on us. It's not really clear exactly how much we got. Somewhere around 18" (or more) in less than 36 hours. That much snow, in that little time is problematic in a lot of ways. Most businesses are not like Joanne Fabrics, which closed for the weather (amazing!) most places tell their employees to come in or they no longer have a job. Not good. So people are forced to go out driving in dangerous conditions. And most of them forget that you can't drive like you normally do on snowy and icy roads. So there are accidents.
Yesterday when I got to work I found that not all of the parking lot had actually been plowed. That is the edge of my car, in my parking space. Next to it is a parking space half full of snow. 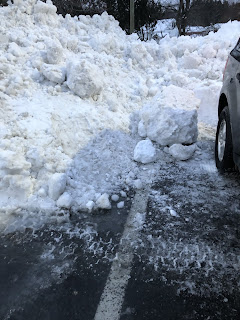 The rest of the row all the way down had snow banks taller than my car, filling half of the spots. I have no idea where those people all parked. by the end of the day they had not finished clearing the lot. 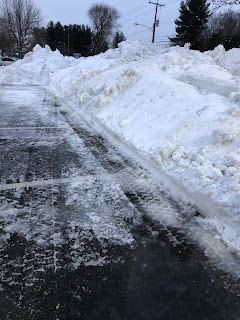 This was just some of the ice in the parking lot. They salted, but that much ice, in that much cold (I think it was 26 when I got into work) is not going to go away even with salting. 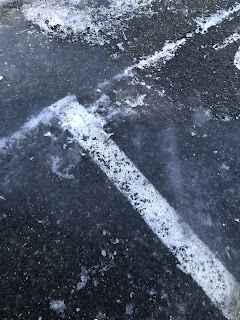 So much ice, and so many very tall snowbanks. Which is another issue with the snow. Even after the storms are past, and the roads are finally safe (at least the main roads, during the day) the snow banks on the street corners are so tall that is is very hard to see out into the road and see if it is safe. 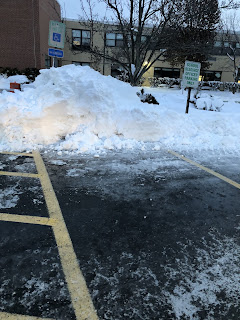 This was the view out of one of the front windows on the second floor of the school this morning. I think a lot of people chose to stay home instead of coming in. This lot is usually packed full. 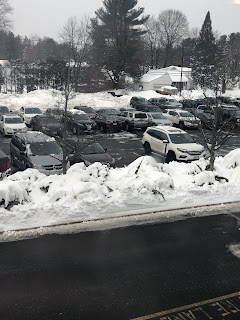 This was my view out of a second floor window in the back of the school. This is the bus loop. It is also full of ice. And as things warm up we will have partial thaws and refreezes overnight. It is barely into December and already we don't really have anywhere to put the snow. 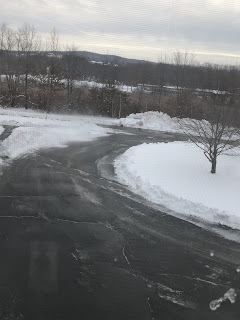 Even my friends that like the snow, and there are many of them, said this was too much all at once. The sidewalks are still not cleared, the side streets are still basically sheets of ice. It's rough. And early in the season. The last few years we have not had much, if any, snow this early. I am hoping we don't have a winter like we did a few years back (maybe many years, I lost track). I don't remember the totals but it was in feet. And we really ran out of places to put it, so the city started dumping it in the river. Which was causing flooding. Not cool.
Tuesday I managed to get out and do the laundry (it was sunny for a couple of hours!) and I didn't get too much doll work done. But I got some clothes cut out in the laundromat and some chaps started. I may not be able to do much work in there for a few months. They keep the heat very low and it is very cold in there. It's hard to work on delicate things with a winter coat on and when you can't feel your hands! So maybe Tuesdays will start being a day off from doll work.
On a good note, Ludlow High School officially has a giving tree! They have sort of done this for years, just not as out in the open as this. Basically, they have people quietly say if they know someone who is in need and then people can give gift cards or money to help out these people. The tree just brings more attention to it. There are no names on the stars, but there are grades, gender and what the person is in need of. I want to take a star, or two or three. I can't afford that. So I am going to see if I can scrape together enough to make a nice holiday for at least one of the people. There is a star that says it is for a 12th grader with a 1 year old daughter. The student is in need of gift cards for clothes and food and the child needs clothes. I want to help them especially. I need to see what I can manage. 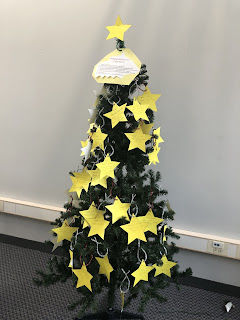 With all the bad stuff that comes this time of year (so many people have S.A.D, there is dangerous weather, it gets dark at 4:30) it is nice that there is something like this. There are charities all over the place but something like this is to help people who live right in my town and go to the school I work at. I know what it's like to be poor. I also know what it feels like to wonder how you are going to take care of your kid. Maybe I can make a better holiday for just one of the students. And her daughter. That would be wonderful.

Eh Ann, I like your attitude. Pick a good one, and they will be lucky.