Chicken and noodles is a comfort food. Which should just be another way of saying full of carbs and I can't eat it. The other day though I heard beef and noodles (related) and I thought, that sounds SO good, I want to make it. So I started searching the Internet to see if anyone had a crock pot recipe for chicken and noodles done with palm noodles. When that didn't work I switched to seeing if there were any recipes using palm noodles in the crock pot. One. I can find a fully realized recipe for lasagna in the crockpot done with palm noodles. But that is not helpful to me. That is not chicken and noodles and not even really related. Plus I already know how to make lasagna with palm noodles and the crockpot method does not seem any faster or easier. So I decided at that point my options were to give up or take a real chicken and noodles recipe and adapt it to be low carb. And to think all the good thoughts about it turning out well. I don't know if the carb filled kind is good, but I linked the recipe I used.
So the first step was to put boneless, skinless chicken breast in the crockpot with chicken broth and seasonings. I had regular chicken thighs and beef broth so that is what I used. (I will put  my recipe with the adaptations below.) 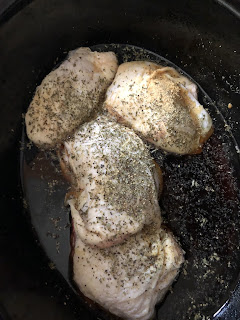 After that the instructions were basically to let the chicken cook on low for 3.5-4 hours. OK. So I did that. I set it for 4 hours on low and I went and did some other things for awhile. About 3 hours in I remembered that a lot of the recipes I had looked at (that called for cream of chicken soup, which I didn't have and potentially can't eat) said that you can mix in veggies. It seemed like a nice idea so I took out a bag of cauliflower and broccoli so it could at least partially thaw. I meant it to be out longer but forgot.
Here is sort of where I veered off from the original recipe. Well, my recipe was already doing it's own thing, but I had to change up the instructions some. At the 4 hour mark I took out the chicken, deboned and shredded it and put it back in the crock pot. Then I added 4 cans of rinsed and drained palmini noodles and the bag of broccoli and cauliflower. I had no idea if this was even going to work, but I kept going. I turned the crockpot up to high and set it for an hour. 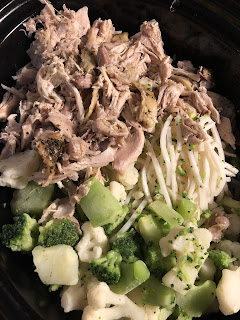 40 minutes in to the hour I made the weird thickening slurry. I can't use cornstarch so I mixed xanthan gum with heavy whipping cream. It looked kind of disgusting. But I figured it would likely work. Actually I was not totally sure if it would work so I was back to thinking really positive thoughts and just hoping. 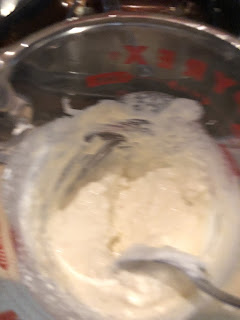 After the last hour was finished I opened the crockpot and stirred everything together. There were some spots at the very bottom where it looked like there was still thinner broth. But with real chicken and noodles the noodles would have soaked that up when they cooked. That is not a thing with palm noodles. 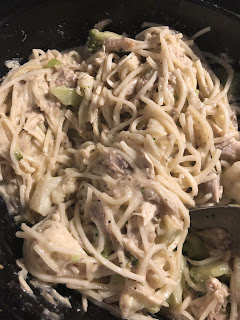 In the end we had a reasonable, fairly tasty meal. As is our way, Ethan and I talked about ways we could improve it. The first thing I said was that it needed more seasoning. I think when most people write recipes they are a bit afraid to add too much. We like a lot of seasoning and flavors. So now I know to add more. Ethan also topped his with parmesan cheese. Which was an excellent idea. And we both thought that the noodles were a bit less firm than when I put them in spaghetti and maybe even longer in the crockpot might do good things for them. Who knows. But my overall impressions were that this was a fairly easy meal to create. It makes a good amount of food. I didn't do the math, but it is low carb and should be fairly low in calories for a comfort food. I will definitely be trying this again. I will type up the recipe below. The way I made it. 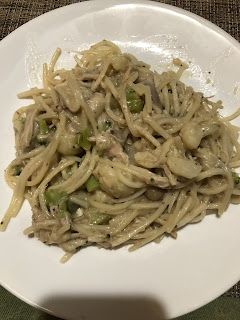 Low carb chicken and noodles in the crockpot

1. Add chicken, broth, parsley, salt pepper and garlic powder to crockpot. Cook on low for 4 hours.
2. Remove the chicken and shred it. Turn crockpot to high, return the chicken and add rinsed palm noodles and veggies. Cook for 40 minutes
3. While the noodles and veggies are in, whisk together the heavy whipping cream and xanthan gum. At the 40 minute mark add in the cream and mix well. Continue to cook for 20 minutes. Serve with parmesan cheese (optional)
Posted by Field of Dolls Studio at 2:30 AM