I don't really enjoy prepping. But once I get into it, I usually can just keep on going and going and I don't necessarily realize how much time is passing. It's sort of like polishing silver, though not as fun. I absolutely love polishing silver. You can take something that is an ugly mess and see the results of your effort. It is sort of the same with prepping. I realized right away that the Breyers I took the horns off of were going to need more work. The Alborosos were not too bad, but the others will probably need a bit of work with the dremel. 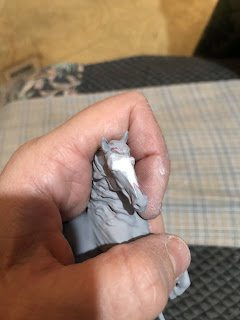 I love the magic of gray primer. You can see flaws so much more easily than you can with white primer. I noticed right away that my Ballicor, who will be my NaMoPaiMo horse, is in need of a lot of hair work. There are little chunks in her mane and tail. So that took a whole lot of effort. 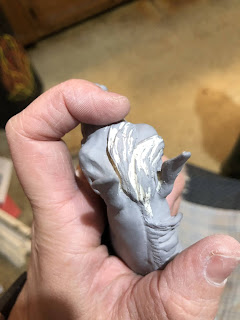 I have almost no experience prepping pewters and I should probably look up how to do them. I pretty much prep them like a resin. Though they are a lot harder to sand. Since my Tennytoo looked good with just primer I glued the wings on and glued him into the base. I am sort of thinking fantasy type paint job for him. Though I don't have a firm plan yet. And I might still change my mind. 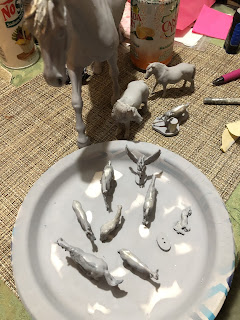 I went back and forth between the micros, minis and Ballycor. Her mane and tail really needed a lot of work. I thought after her first round of primer she would not take too much work, but then I just kept finding more things that needed to be fixed. 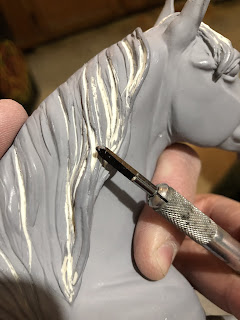 My mini Brio didn't need too much, but there was a noticeable seem down his mane. It can be tricky to get the seem out of a mane without ruining it. I have no idea if what I did is enough. I need to reprime and check. It's never ending. 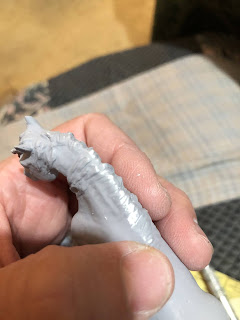 Jewel is the only resin micro I was working on today. She is not too bad, but she had a few really noticeable seems that needed to go. And her base almost looked like it was split. I think it was an optical illusion. Seams, bad lighting and too much prepping can make you see things. Or stop seeing things. Like flaws that need fixing. Prepping can seem never ending. 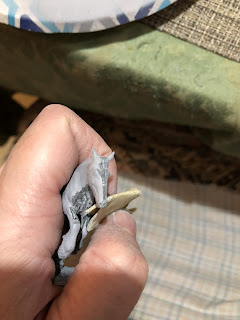 If you look really closely in this photo you can see some of the bumpy crud in Ballicor's tail. This might have just been on the model or if could have been from the first round of primer, since the can was almost empty and not new. It could also have been a combination of both those things. Either way, it means more scraping. 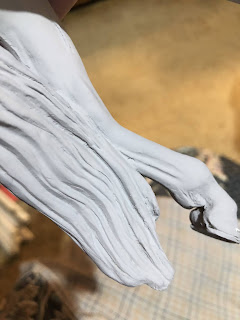 The Alborosos are coming along well and I almost want to paint one. But I have so many things to paint. I also sort of want to have someone else paint one for me. It really is an excellent model. I should probably lop the horns off of a few more and get them prepped. I don't even know how many of them I have at this point. More than a couple at least. 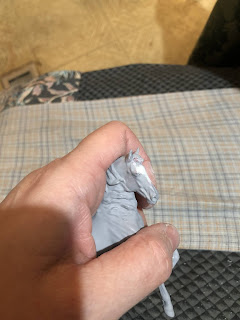 I like the pewter micros but they are very delicate. I had to push and pull Tennytoo's legs back into position. I don't know what caused them to go wonky. It could have been when he fell, which happened at least twice. Micro Duke is another with pretty delicate legs. Lucky for me he didn't need much work. 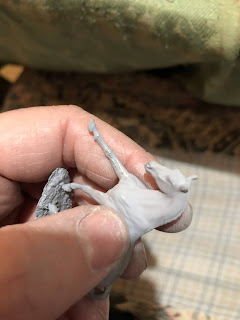 I am hoping that in the next few days I can find another day that is above freezing and not precipitating or windy so I can reprime everything and see what work they still need. Oh, a good tip for priming in the cold, make sure your can of primer is the same temperature as your model. When I left them on the porch to dry, I left the can of primer out there too. You end up with less weird reactions that way. I have done plenty of priming in less than ideal temperatures, and that trick has always helped them come out well.
So remember everyone, NaMoPaiMo is coming. It's time to prep your models!
Posted by Field of Dolls Studio at 2:30 AM