Yesterday I got up at 5:00 to get ready to go to work. At 5:02 the Ludlow superintendent called to cancel school. Two minutes later East Longmeadow's superintendent called to cancel school for them. Ethan decided to start digging out right then (which was probably after coffee and breakfast) so I made him some coffee and went back to bed for a bit. Because when you have already had 5 and a half days off from work and they give you another day off, why not? Sunday night's storm was sort of big, though the freezing rain was really the worst of it. Monday's storm dumped a ton of new snow on us. 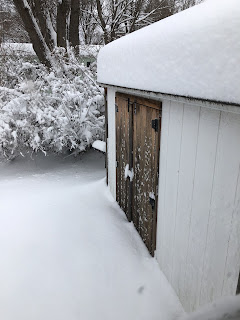 This is the same view out of my window that I posted yesterday. We are losing things in the snow at this point. The good news is the snow is done. Until Friday anyway, according to the forecast. 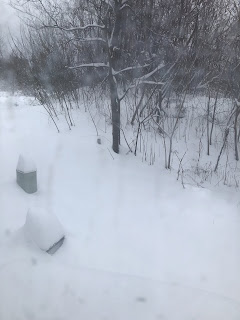 Monday was not a totally unexpected day off, some of the teachers had been speculating as early as Friday, but when the official word came in I planned out a very busy day. And I was amazingly productive. I don't know how I did it. Often during this time of year I am really unmotivated and meh. But Monday I got a lot of errands done, as I mentioned yesterday, though I couldn't go to Joann's because they were closed. Due to the weather! This was actually sort of cool. By the time I was out it hadn't been snowing for hours and the roads were totally clear and just wet. But the fact that a retail place closed for the weather, and not state-of-emergency-called-by-the-governor weather, was pretty cool. Though I still need Joann's to be open so I can get a few things. I did manage to work on a doll without getting to the store. 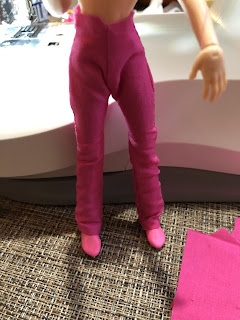 This is the showmanship doll I mentioned yesterday. When you have an unplanned for day at home you can get a lot done, if you stay motivated. Monday was motivation day for me. I cleaned, and worked on the doll and I would clean or organize something else and then go back to working on the doll. Somehow I just kept on going. It was sort of a long day, and I didn't really take any breaks in between doing all the things, but I did get a lot done. And that always feels good. 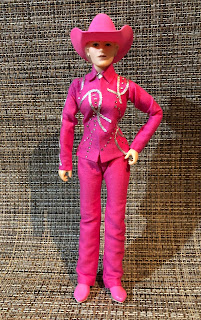 So yesterday was another snow day, tomorrow I will let you know if I managed to be as productive as I was on Monday.