Breyerfest is only 2 days away! I am not really sure what I am looking forward to from the experience. I am curious to see what the surprise horse is. I am curious to see what special runs I get drawn for, though I am not deeply in love with any of them. I'm really excited to watch Kristian Beverly's tack making seminar. I am not sure if I am particularly excited about much else. Last year I could never figure out where and how to watch any of the live broadcasts, so I missed it all. Before someone tells me they were on Breyerhorses.com, I already know that part. But I never saw them. I was logged into the Breyerfest section and I guess I was potentially just always there at the wrong time. Or maybe I was missing a trick. 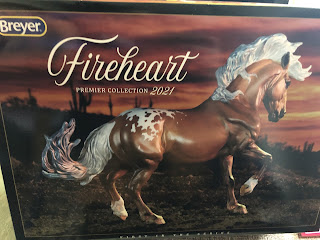 The other day Fireheart arrived. This is late for the first premier club model. Some people are really upset about it. But some people would always be upset about some detail of a club release so it might as well be because the production and shipping was outside of Breyer's control. 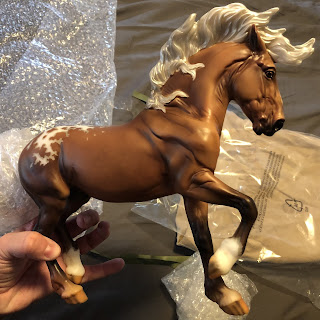 That is definitely something a lot of people have forgotten so quickly, or never really wrapped their heads around in the first place. Shipping is not under the control of the shipper. At least after the shipper has put the items in the mail. On that same note, shipping time is not under the control of the person who placed an order. Is this all making sense? The fact that we are still dealing with a worldwide pandemic seems to have escaped the notice of some people. They want what they want and they want it NOW! Well, Fireheart is cool, but he's not worth throwing a tantrum over. 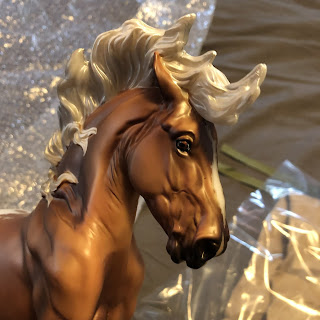 In some ways I can consider Fireheart to be my first Breyerfest purchase (who has arrived). But I have decided that he needs to go live somewhere else. I really love him, he's a very cool horse, but he is not going to be a useful performance horse. I don't have space to collect large horses that are just cool to look at (I have seen him in tack, he is very cool, he is still not a performance horse). He would probably have to live in a box, potentially for a very long time. That's not a nice fate for such a cool horse. So he is moving on. He is headed to his new home as you read this. 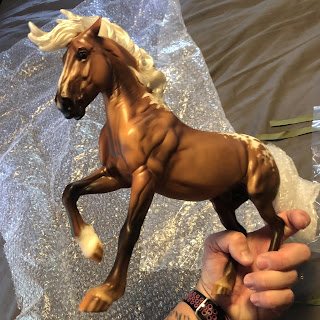 Fireheart was not the only cool thing I got from Breyer this week. They also sent me a bunch of new clothes. Well, the shorts were something I got off Mercari, but other than not being running short, I think they would look pretty excellent with my Splash of Color Dash T-shirt. I am (trying to) mentally prepare myself to run on Sunday. I am not ready, in any way. I meant to train and just didn't do it. So a lot of my 3K is going to be walking so I don't permanently injure myself. I have told myself I am not allowed to open my medal until I earn it. Seems like a decent bribe to get myself to go out and at least walk the 5K. Sunday is also supposed to be quite cool. Only a high of 75. It is also supposed to be raining, so I may be running in the rain. Which will not be fun. I also got my Breyer Ambassador T-shirt. I still wish I could redo my seminar video, but it is out of my hands now. I hope people like it. 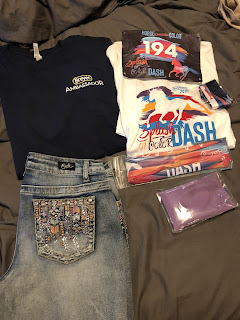 So lots of cool things from Breyer this week. I have tracking info from the halter I bought from Barefoot Appaloosa Studios. Stephanie Blaylock's sales posts are going up today, I have a bunch more with timers set so I don't miss them. I am really glad I skipped doing a Breyerfest sale! It is going to be such a busy time!

Amoung many other things to thank you for, Thanks for reminding/convincing me that Breyer 5K stuff might be waiting for me down at the box. It was indeed and I just picked it up! No more running in last year's t-shirt,... I am ready.