I worked really hard on my horse for the Breyerfest Best Customs contest. It was the first time I had ever customized a horse and I had almost no idea what I was doing. Figuring things out was what was part of the fun for me. Being able to finish the project gave me a huge sense of accomplishment. Clearly. I keep talking about it.
Some unexpected consequences of making my horse for the BCC was all of a sudden wanting to work on more horses. What's going on here? I am not a customizer. I also don't really have the "extra time" to get into a new project. I still have old projects that need to be finished. Remember my Breyer Andalusian that I got from Jennifer? Yeah, I still have her. She is still in the closet with no mane or forelock. I did manage to get a bit more work done smoothing her. I thought about putting primer on her one day and then had to go out unexpectedly. Now my excuse is it has been raining almost continuously for weeks. Or it seems to be weeks. I also have limited times when I can work on horses. But anyway, I have not forgotten my Andalusian, and I have not forgotten that she is part of my plan to make absolutely everything in a performance entry myself. I can do that. Eventually.
Anyway, the Andalusian was before Just a Theory getting redone for BCC. After I finished Just a Theory was when I really got bitten by the customizing bug. I decided I needed to customize a Winx. I also have super awesome friends. Joan Yount had a Winx she won as a prize that she was not doing anything with. So she sent her to me. 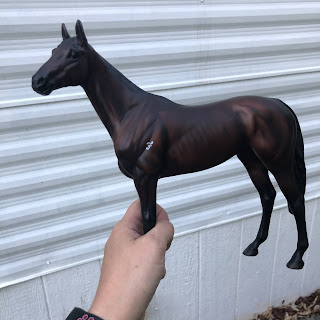 And I cut her head off. Because that is apparently what I do with horses now. I also decided that Winx has a tail I can't live with, so I cut that off too. Because I definitely need more challenges in my life. 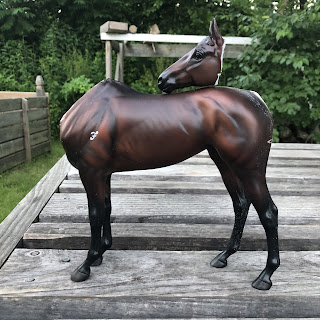 So then poor Winx sat in the close for a while. I started to wonder if I was ever going to get around to working on her. It was odd to have a horse with no neck and her head just stuck in the opening to the body cavity. Not that it inspired me to work on her or anything. I did watch an excellent tutorial from DeeJayBe Studios on how to do it. I ended up doing what I always do, using the tutorial as sort of a guideline and then doing what would work for me. So let me tell you something I know from experience. Practice can make almost anything look easy. The tutorial made it look like getting that wire glued in the head and in the body was fairly easy. It is not. At least not for me. It was a sort of long, weird, not so easy process. 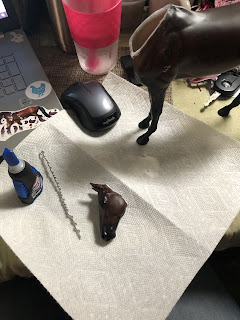 Eventually I got the wire glued in, got the glue to set, and started building up the neck with aluminum foil. I really wish I had the super malleable dollar store foil that was recommended. I didn't. Mine was not super heavy duty, and it was not super soft. I also managed to do the thing I didn't want to do and now I have a loose piece of foil rattling around in the body cavity. Oh well... 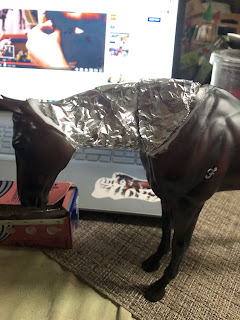 The next step after building most of a neck shape with foil was to cover it with a layer of epoxy. Also not as easy as it looks. As I tried to smooth and spread my epoxy my foil would try to lift in places. As I tried to smooth things down and make a nice join at the chest cavity everything would move. This was sort of a frustrating, messy process. But eventually I got this layer on, maybe sure the head and neck were straight, got one quick progress photo, and I put her away to cure.
So this is where I am now. I have the base of the new neck on, I did use reference pics so it looks right to me. But as I look at this photo it looks wrong in the throat to me. And then I realized it is not really the throat, it's closer to the base. I need more neck there. Which I can add when I do the muscling layer of this redo. That part really scares me. But I have reference, I have instructions I can use as a guideline, and I know that everything is fixable. I sort of want to take a dremel to this neck a bit before I go into the muscle layer. And that might happen. 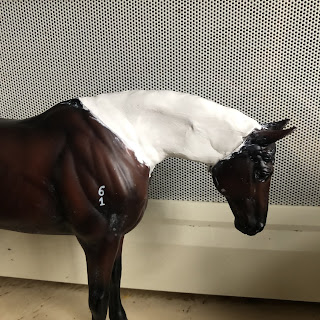 I still have at least 2 more sessions with this horse before I am ready for primer. I need to build the neck muscles and then when that layer cures I need to add the mane. She also still needs a tail, which I might do separately to any work on her front end. She is still definitely a work in progress. Bu She is coming along and I don't hate her. Even in the ugly stage.