As I watch so many school friends post about how it is too close to back to school time I keep thinking that we are not even done with the summer program yet. There is still another week after this one. Travis has two more weeks in his. But I guess in a way it is sort of almost back to school time. And I don't know what I want. For 5 years I have worked at LHS and I have liked a lot of it. Not all of it, but a lot of it. Mostly the people I work with. Again, not all of them, but a lot of them. But I am finding that I really love the program I am in this summer. I have never felt this useful as a para. I know my stuff, helping these kids is second nature to me, and their bad days don't make me feel bad. They just make me want to try harder to figure out what is going on. I have totally had that at LHS. Though this past year was bad. There was no way to bring kids out for a chat if they were obviously struggling with things. Anyway, As a hypothetical I asked my supervisor if I could potentially work high school hours at the middle school, if there was an opening in the program for the school year. And she is checking for me. I don't have an answer yet, I don't know if I could even imagine leaving LHS. Mostly the people. But I am fully aware not everyone has the skills I do. I have a lot of training and a lot of practice working with kids with high needs. And I am good at it. So I am not sure what is possible or even what I want. But I am thinking about it.
Last Saturday I decided that the vine that tried to kill our pine trees was trying too hard to get a hold on them again. And the weeds were taking over as well. Travis had been asking for a particular toy and I kept on saying no. It was a bit pricier and he asks for lots of action figures. But Saturday I told him that if he did a really good job on the weeding, and didn't quit or complain, I would get him the toy. And he worked hard. 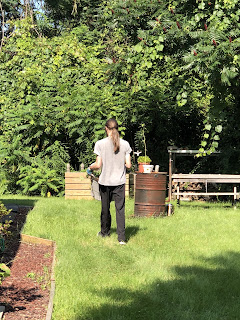 He pulled weeds and filled the muck bucket over and over. I did help, but all I had to do was tell him to go empty his bucket and he took care of it. When everything was done we went in and looked to see if the toy was at the close Walmart. It was not. So we ordered it. He worked hard and definitely earned his toy. 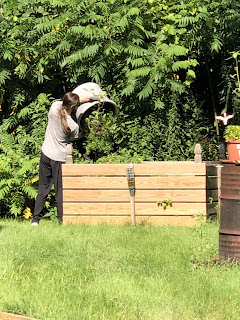 Doll work also continues. I have been working on some western dolls and have some hunt seat dolls in the works. Hopefully I will have something to share soon.