I had a really great idea for my Breyerfest Performance Excellence entry for the Best Customs Contest. I was thinking about performance, and thinking about what is more interesting or different, instead of just super run of the mill, and I thought of therapeutic riding. Anyone who has known me a long time, or who reads my blog, probably knows that I am pretty into therapeutic riding. I volunteered at the PVTRA for several years during the time Travis took lessons there. Therapeutic riding is one of the few things horse I have a ton of real world experience with. It seemed like a natural idea for me to set up a therapeutic riding entry.
So first I needed a therapy horse. It could have used any horse, as long as I repainted it so it was CM, but I wanted to have a nice, calm horse. Pretty much every standing Breyer horse has it's head up in the air. So I took an Ideal Quarter horse and chopped it up. But this is not news. I shared the entire process, revealed the horse, and have talked about him quite a lot. So here for the first time is my BCC entry. It is a snapshot of therapeutic riding. The leader brings the horse even with the ramp and then stands in front of them. One of the side walkers will help the rider onto the horse. Sometimes there is a second side walker, and I had another doll ready, but he blocked a lot of the horse so I left him out of my scene. I am still incredibly proud of my entry. 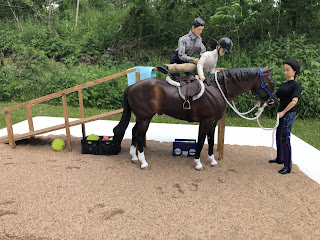 Sometime on a Sunday afternoon I saw Vincent Lange's entry for the performance category. I never actually expected to win the contest, but it was that moment that I felt like I lost. His entry was stunning! And very elaborate. It was a good thing that part of my goal in making this horse was to also have a nice performance horse for myself. Lol, plan B. But I still had a bit of hope. For a few minutes. 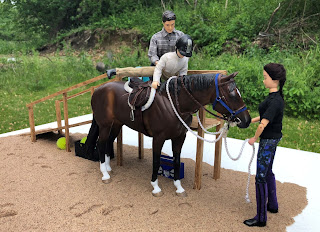 I found out that Hannah Bear had also entered and I saw that Laura Skillern has entered as well. While I still had not officially lost I figured with what I saw from Vincent, and what I know that Laura and Hannah can do, that was it for me. But I would not let that crush me. I never go into any competition/show expecting to win. I am a good performance shower so I usually have a shot at something, if I put in the effort. But there are times when other entries are just better. The Tuesday evening after I saw Vincent's entry I saw Hannah's entry. Holy cow. And then at some point after that I saw Laura's entry. I was also listened to Mares in Black #74 and Heather was saying some people have the inability to look at the table and know when they are beat. That is very true. I still have not officially lost, but I can see that it is a very strong potential. 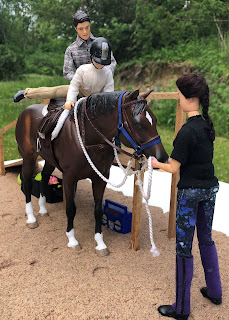 I again could not imbed a video in the post so here is a link. This was Travis riding in the PVTRA 2009 Spring Benefit show. For anyone wondering, my doll is my "Travis" doll. https://www.youtube.com/watch?v=fgnDUwdrIeQ
I was going to wait on posting my big reveal until after Breyer announced the finalists. But on Friday I got an email asking if they could use my photo(s) on Breyer.com. The email stated that the judging had not been done yet and it did not imply I was a finalist and did not change my chances of winning. Well Breyer, I am already a winner. I might as well show everyone my setup. I am also working on another new custom horse. I may even sort of have a plan for next year. The actual custom contest results should be coming out today...
Posted by Field of Dolls Studio at 11:30 PM

Your entry is very accurate and ties in with one of the charities that benefit from BF, so I am not surprised that Breyer wanted to use your photos. The video crapped out after a few seconds, but it's nice to have that memory available for you!

Could you have meant ability, not inability, to know when they are beat? That sentence is confusing.

Thanks for letting me know the current results! And, your new horse is perfect for the job.

Inability= Lacking in ability. Some people lack the ability to know when they are beat. That is exactly what I (and Heather) meant.

I am proud of you that you looked at the bigger picture. That you took a real life situation and made if Model history. You put love into the contest. It came from your heart