It is a little bit hard for me to work without a deadline. Though it is also a little hard for me to work with a deadline. If it's a small thing I need to do and a short deadline, I am usually fine. But when it is a bigger thing and I have a lot of time... I struggle. It's weird, but having too much time makes me slack a lot. Even saying that sounds weird. For example; after one of my live sales I am tired, a bit burnt out, and in need of a break. I usually do actually take a break, but it is only maybe a week. Four days is more likely. I know there are probably many people who think I should take more breaks, or longer ones, but this is my business and I run it like one. And I am good at it. Getting back to the point, after I take my short break after a live sale I need to get back into things, to prep for the next live sale. I have officially decided I will be holding them 3 times a year. One at the end of March, one in the middle of August, and one on Black Friday. Doing it that way gives me about 4 months to prep for each sale, and 4 months is a good chunk of time. Until it's not.
When I was working on my horse for the Breyerfest Best Customs contest I had a deadline. And I basically worked on my horse for a few hours each weekend, which was mostly all the time I had (because I work all week). When I got near the deadline I did have to pick up the pace a bit because I also had to still set up for the pics, and setting up a therapeutic riding scene is not super fast. But I made it, I entered, and then I was done. But because I am me, I have also started on another custom. And I started on more projects.
Sometime sort of recently (within the last month maybe) I talked about selling my awesome Native American tack and deciding to again make a new set. I got a decent start on things, changed my mind on the material, kept going, got a decent start on things, and then took a step back and a hard look. 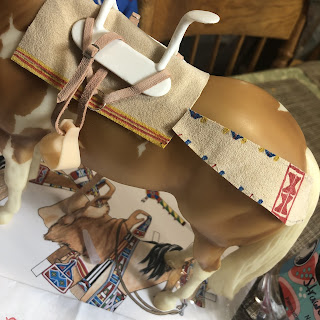 I just did not like how the paint work was coming out. It looked sort of sloppy, even though I was super careful and was definitely taking my time, and it just did not look like a quality piece that someone put time and skill into. I needed a new plan. 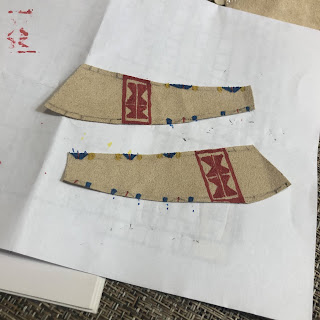 The super awesome set I sold was embroidered, and I loved it. So I decided to give that a try. Since I was just testing it out I went right over the painted designs. 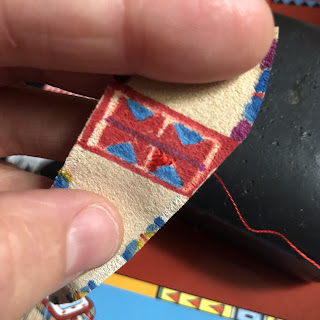 It really looks so much better! Still not perfect, but much more realistic. So I decided I was going with this method. 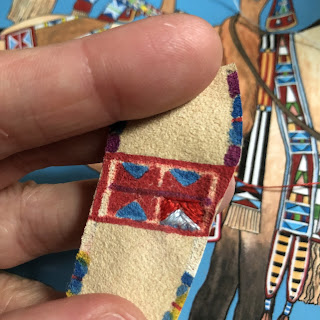 I tested out  a couple more parts, to see if I liked how it would work, and settled on this style for my set. Which meant... 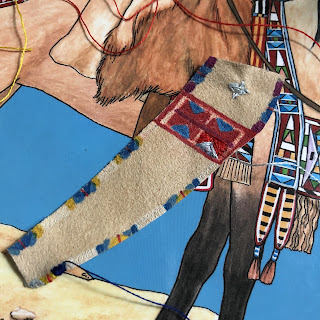 I had to cut out all new parts again. But I got them cut out and all the designs are drawn on. I did also get a start on the embroidery. I have one hip drape almost finished. Clearly this project is going to take me a very long time. But I want it to come out well, so I will just have to be OK with that. 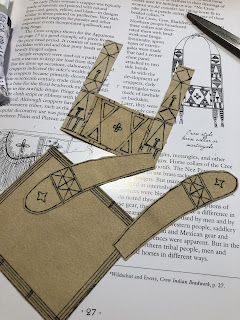 I imagine I would do better on this project if I had a deadline, but I will just have to do what I can even without it. The embroidery really hurts my hands so I can't do it all the time. But I managed a few hours and got most of the way done with one drape. Maybe another...20 or so hours and I might be done with the embroidery. And maybe not.

Wow! Embroidering by hand is HARD! I can’t wait to see what it looks like once your finished!