Jennifer Buxton posted on the Braymere facebook on Tuesday that she has been writing her blog for 12 years (it's been longer I think, but she has been really writing for that time) and has written almost 4,300 posts. That is a lot of posts. I have had my blog for 14 years. But I REALLY started blogging in 2019. Somewhere in February of that year, I think, I decided I was going to blog once a week, since I was such a blog slacker. That quickly turned into posting every day. Then in 2020 my goal was to post every day. And I did, sometimes more than once. So far for 2021 I have done well too. I have had one or more posts a day and I am pretty sure I can finish out the year. I likely can. I am getting very close to 1,100 total posts. But it is definitely hard. I really do get stressed out if I don't have a post scheduled to go live at 5:30 in the morning (which is shortly after I get up and go to work. It shouldn't be that way, but it is.
I don't have a great segue from random thoughts about how hard blogging can be so I guess I will just move into talking about this guy. After I did the post about Dani's new doll Roberto ordered this guy. And since I really like the rolled sleeve look I was plenty happy to make him. I'm not positive, but I think I remember reading that both the dolls would be going to shows this weekend. Maybe I made that up. If not I will hopefully get some show photos. 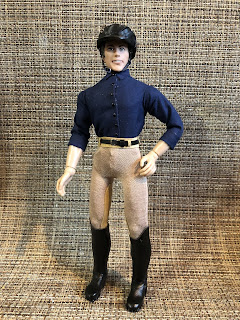 So switching back again, blogging is hard. I would still love to have guest bloggers, but so far I think Corina Roberts is still the only person to ever write a guest post for me. I am open to anything model horse or horse related. Maybe stuff about photo shows, live shows, Breyerfest, new horse/tack/props purchases. Whatever. Something I have learned while writing this blog; people who collect model horses like to look at model horses. Their own, other people's. Horses, tack, setups, show photos, photos from shows. Model horse people like those things. I like those things too. I am not sure how many unboxing videos I have watched since Breyerfest. Or how many "loot" photos I have looked at. They are fun. 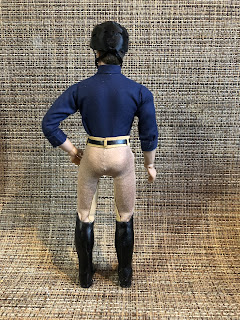 Anyway, blogging is still hard but I am going to try to stick it out. Jennifer gave us so many posts for so many years. She deserves a break. And maybe a nap. And you know, I bet she still would not mind if you bought her a coffee for all the years of work she put in. In case anyone is thinking of that, here is her ko-fi, to make it easier https://ko-fi.com/braymere
Speaking of Ko-fi, Mary Ann Snyder had a very cool idea. I mentioned the other day that Ko-fi now offers monthly subsciptions, similar to patreon. And like patreon, you can have different membership levels. Which I think is fun. I asked if anyone had any ideas for rewards for different tiers. I just can't think of what to do. Mary Ann said I could offer a quarterly miniature surprise. And I really like that idea. I really like doing mystery boxes. And in a similar way to doing those I could offer the chance at discount coupons. I could potentially have different levels of mystery box even. Small ones, medium ones, etc. It's a fun idea for sure. People seem very into the mystery boxes and I like searching for new miniatures to put in boxes. This could be a good idea. Not that it will necessarily go anywhere, but it's an idea that I will have to play with a bit. Though it also sounds like I could very easily just make more work for myself. But I still really like the idea.
Posted by Field of Dolls Studio at 11:30 PM

Anne:
I was wondering when you were going to say something about Jennifer shutting down her blog! Speaking for myself--I'm really saddened that she did so --with no warning to her 3 million viewers!! I *don't* begrudge her looking after herself (or you either!) Both of you have been hinting and saying how hard it is to blog--and I believe, we your readers, *get it* and *understand*!! (We *really* do!!)

I think what troubles me is that you bloggers put yourself "out there" for *so* long -sharing parts of your life as well as your knowledge of the hobby (for you-- it *is* your doll knowledge , how -to's and photo showing skills!)that you *don't* realize how much people may feel that they "know" you and think of you as a "friend" --even though we may *not* have met "in person" yet! (Sorry! I *don't* mean for that statement to sound "creepy") (For me, I DO personally know LYNN I.,(we've been friends for *years*!) and I have met JEN @ BREYERFEST at her booth--but among so many people, I *doubt* seriously that she remembers me! Ha!)

My thing is--as mentioned earlier this year, when this subject first came up--if you're getting to the point where your heart *isn't* into blogging like it was when you first started, why NOT just post and say "hey gang! I need a mental break for a little while--so I *won't* be posting for a bit!" That would be BETTER than just "ghosting" your readers!

I'm not trying to be negative--but I've read the responses of some of the other concerned readers and they mentioned that she may be looking to get *paid* for her time and effort---which I think is a GREAT idea!! Model Horse Blab has a subscription fee --and *no one* complains! I recently heard that Stones Horse Ref might do *same* thing because of the COVID situation, she just *can't* afford to it for "free" anymore! To me, that's FINE and understandable!!

If THIS is what it takes for people like you, Jennifer, Lynn, Brenda, Andrea, etc to continue sharing with the hobby---then SAY SO!! The resources you ladies provide to the hobby is INVALUBLE!! (I *know* I'll be upset if we lose all of Jennifer's archives!!) If KO-FI is *so* important to you, I *know* after this, I plan to subscribe so you will know how much you *ARE* appreciated!!! (I'm sorry--I've been a reader for a while--and it *never* occurred to me to donate!! I apologize for that!)

THANK YOU for posting the link to Jennifer's Ko-fi Page!! *If* you do change your format, I *hope* you will allow the ones of us with whom you are not familiar with to be allowed to still subscribe! ( Do you know if Jennifer is only going to allow "invited readers" to her group --if she ever returns??) I *like* the idea of your "mystery" boxes---maybe I'll have a chance @ *finally* getting some of your merchandise!! Just *please* DON'T "disappear"!!