All About The Angles

I got an email from Breyer the other day advertising the photo shows. The email said that photo showing is as easy as taking a photo of your model horse, telling the judge a bit about your entry, and uploading the photo to ponybytes. Technically, this is accurate. But taking a good photo, something that shows your horse/entry to it's fullest potential, is not easy at all.
I am not a great photographer. Some of that is I am a little impatient about things. Sometimes. There are so many angles that matter when taking a photo of an entry. You need to have your lighting angle just right, or things look weird. You need to have your camera angle perfect, so you show what you need to show, but also the best side of it. That can be tricky. Here I have included a nice close up photo of my horse from his roping entry. Because putting his tack on took a long time. And I like the photo. The back girth was somehow missing a tongue buckle. And all those buckles in general take a long time. Anyway, I got everything on him and this is my preferred side of my horse. 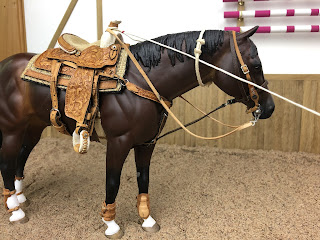 I decided to pull out the two barrels and a pole game for Just A Theory. I haven't used it in a while because it really only works with a standing or walking horse. And I have not shown either in a while. This angle covered a lot of the horse and I didn't like it. 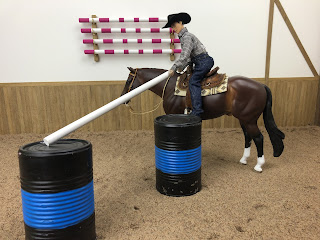 I still don't love this angle, but it is a bit easier to see what is going on. The doll's dainty hands make this a bit tricky to set up. A lot of sticky wax was involved. 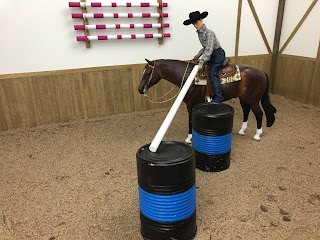 Next I had a rope gate for my arena trail entry. I try to get away from poles entries any time I can. Though, in general, arena trail is usually a ton of poles entries. Anyway, I really like this photo, and it shows the best side of my horse. 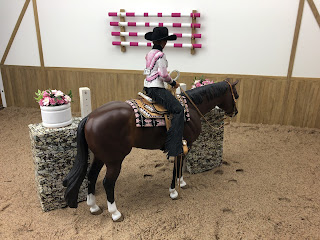 I took this photo just for fun. Though come to think of it, I have seen actual entries in photo shows taken from above like this. While it amuses me, it's not a competitive photo. 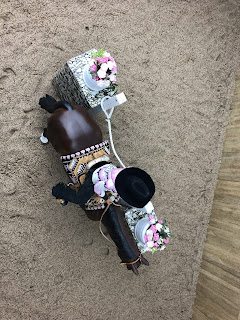 In the end I chose a photo from this angle (though not this exact one I don't think). It shows the wonky side of my horse (such a chonky neck!) but it also shows the obstacle, the tack, the doll sitting correctly, and her actually putting the rope back on the post. Though come to think of it, maybe I need to add a note to my entry saying she is closing the gate. Since if she was just opening it she would be backwards... hmm. 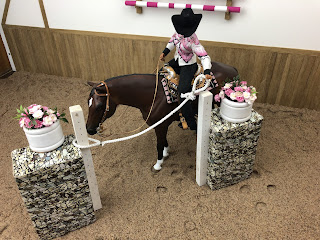 The angle of this photo makes it look like Karen is asking to speak to a manager (apologies to all of the Karens I know, even the ones who also make the jokes, who have to live with their name being associated with a complainer). Maybe she feels her cows made her time slower, who knows. I don't love or hate this team penning entry. Maybe the angle of the pic is making me less than thrilled with it. Maybe my horse is too chill, I have no idea. It still sort of amuses me. 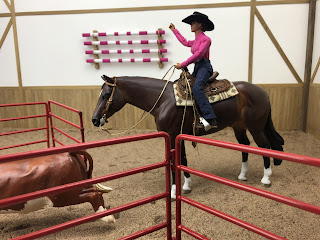 My last angle to discuss is not about model horse showing. It's about the student in the back of one of my bio classes who had this on his screen about 10 minutes into taking his final exam. Clearly, he is working hard. And maybe forgot that there were 2 teachers at the perfect angle to see what he was doing. 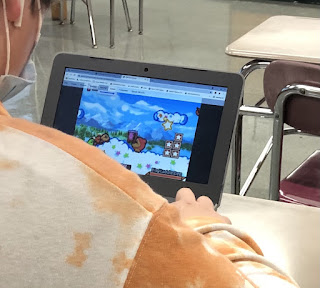 Back to model horses. Clearly, photo showing is not easy. Taking a good photo of a model or performance entry is definitely not easy. But just as with anything else, if you work at it, it gets better. I have some really amazing outdoor photos of my horse, Bootlegger, that I took years ago. They are still quite competitive. A lot of my other old photo show pics are not, but they were tricky because most photo shows wanted realistic backgrounds. I didn't have that option. The ones I took for Breyerfest last year... were bad. Bad lighting, more than one backdrop, which was a little distracting in some entries, bad lighting, not enough attention to all the details of tack, dolls, angles... bad lighting... I think I have mostly solved my lighting issues, though my lighting is still iffy at times. I should refer back to the post where I showed my setup, it was on point that day. I have to say though, my new arena has made a world of difference! Too bad it doesn't work for anything that should be outside of an arena, lol.
Posted by Field of Dolls Studio at 11:30 PM

Mad idea for the third photo, the one with 'teeny hands:' Maybe the rider could use a little rope to manipulate the end of the big pole, like a logger drag (or a lasso, or a dog collar). That way he'd only have to hold the rope. It would mean more work for you but it would look more realistic than a bump of white wax sticking out of the pole.