For many aspects of life you need to do some prep work. Or at least you should to do the thing well. Recently Elecktra was going on a job interview. I prepped her on the way over and she told me they asked her almost every single question I did. But she was prepared with some really excellent answers. If you are taking a test it's a good idea to study a bit. And most craft projects, at least the ones I do, take a bit of prep work. Some more than others. I had another struggly day the other day, where it was hard to get into anything, and nothing got finished. But I did get a good start on a bunch more bareback pads. I need to sew the fronts and backs together and do the finish work, but I am further along than I was. 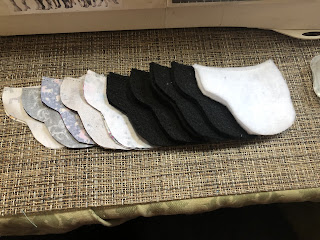 I also got a start on the 2 parade dolls I need. I may just pick away at this 2 dolls for a bit. I don't need them for any particular date after all. It would just be nice to have them. Since apparently I NEED to have 2 parade sets. So I got started. Maybe on days I finish my other work early I might do a bit more on each of them. Just pick away until they are done. I did get some other clothes sewn along with these outfits, but I didn't get anything finished. 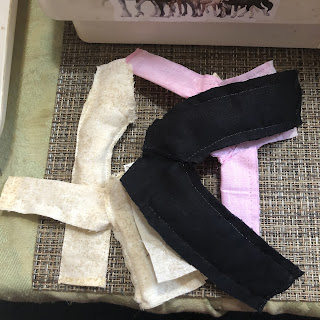 The third horse for the 2021 Breyer stablemate club is Tobias. A lot of people have been throwing shade at this little horse. I have seen so many people saying that they don't see anyone saying they are keeping them, that they see ones listed and just sitting, and when people have him in hand they have so many bad things to say. I happen to think he's excellent! Not only do I adore this mold, but this is the first stablemate club release that I have received that doesn't have some weird flaw (like a gouge or crap in the gloss). I think he is wonderful and I was very happy to put him on the shelf with my others. I used to have a very large conga of this little model, but now I am down to just 5. He's great. So far I have loved every single release from the club. 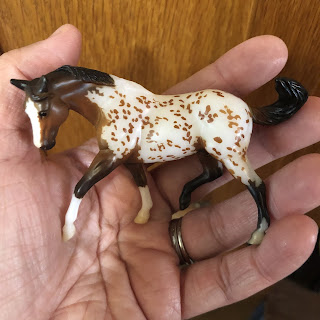 I was waiting a bit to put my entries for the Breyerfest Open show into the classes. But then the other day I decided it was silly to wait. My entries were ready and I might as well just do it, it won't take long after all, they are already on ponybytes. Lol, sure it won't take long. Well if I had managed to actually get all of the information on my photos in the first place, then yes, it would not have taken that long. But I was checking and so many didn't have breed and gender (which is required, even for performance photos) and I saw one photo that had just the totally wrong documentation attached. But I finally got everything fixed and unless I lose my mind and completely retake some of my photos (which I have not ruled out just yet) I am done entering the Breyerfest Open Show. And now I can move on to other things. Like maybe seeing what seminars are at Breyerfest.