School was finished on Tuesday, weirdest last day ever. But really, the weirdest school year ever. Wednesday I didn't have to get up quite as early, but my alarm (that I had already turned off) went off anyway. But I went back to bed for a half hour before I got up to get Travis off to school. After that my goal for the day was lofty. I was going to stay awake and I was going to function! This is not always easy. Especially when you are really burnt out from the weirdest school year ever.
Anyway, I did manage to stay up and I got to work, almost immediately, on sewing a couple of hunt seat outfits. I already have the clothes cut out, the bodies were prepped, and the heads were haired. The dolls were well started and I wanted to see if I could finish both of them on Wednesday. With a whole day available to me I didn't see any reason why I couldn't do it. 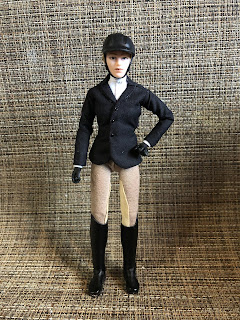 So I got the 2 hunt seat outfits sewn, and a couple more hoodies that were cut out, and then I baked some bread. Ethan has been asking for some bread, but I thought I needed time to let the cream cheese warm to room temperature. Nope, this recipe is soften in the microwave for 45 seconds. Anyway, I made some bread. Then I got out the paint box and painted the 2 doll faces. After that... I took a nap. But it was not a super long nap. Just a little one that I earned for making it through the weirdest school year ever. 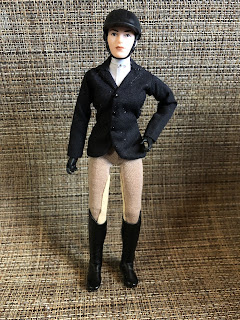 After my very small nap I got out the doll box to get into dressing the two hunt seat dolls. I started working on both of them at once, but once I had the shirts and breeches on I moved on to working on one at a time until each of them was finished. And I did it. I did work for most of an extra long day, but I managed to meet my goal and get the two of them done. One of them is a commission and the other will be for my live sale, which will be August 14th. I am really pleased with how these two came out. They didn't give me a hard time (which some dolls do) and I was able to stay motivated and keep on working. Now I feel a bit accomplished and don't have to push myself as much the rest of the week.