When I received my first arena from Emerald Studios I loved it immediately. Though I also pretty much immediately discovered that it was very tricky to take a lot of performance photos in it without the edge of the wall showing. As happy as I was with my arena I realized that I needed a longer one. So I ordered a new one, just 10 inches longer, but it has made such a difference!
Saturday I decided to set up for an English photo shoot with Apocalyptic. It was 90 degrees and I don't have air conditioning, but that seemed like a fun idea. It was actually really great. I put a little fan on the floor behind me, facing up at an angle and was quite comfortable. And let me say, kinetic sand REALLY loves hot weather! The sand is super easy to move around when it is really warm. 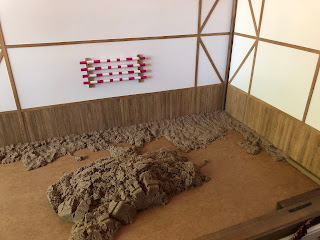 The new arena is large enough that I managed to do over fences photos in it! I had to fiddle with angles and the jumps were partially outside of the arena, but nothing is right up against any walls (I hate that) and it worked out. 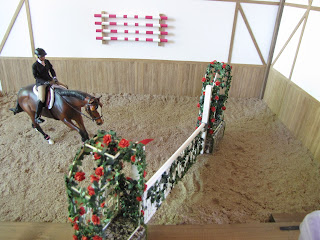 I think this was an accidental photo when I was putting the camera down. But it's still cute. 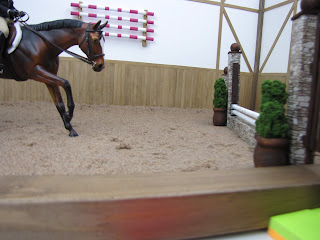 Once I had my photos cropped I was a lot closer to a reasonable over fences photo. It was still not quite what I wanted, but I was getting there. 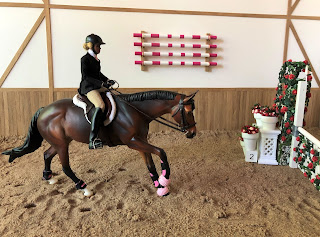 I started out the photo session just using the sunlight from the huge window next to the closet. But then I decided that left the front of the horse, and the doll, a bit in shadow and I set up the lights. It is SO much easier working with this setup in my living room than on my bed! Though I have to make sure absolutely everything I need is out of the closet before I get started. I didn't this time, so I only took photos of Apocalyptic. 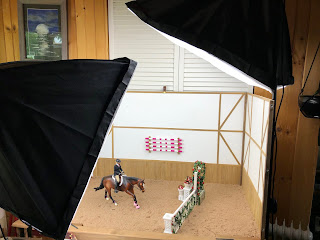 This is my final jumper photo. It was still a bit tricky to get it but I think it all worked out pretty well. The arena is only 10 inches longer on the back wall, but that makes a huge difference. It's now fairly easy for me to set up to do indoor photos, though it does take a bit of planning to make it work. I am now a little bit closer to being ready for Breyerfest Open. Entries open on Friday, I need to hurry! 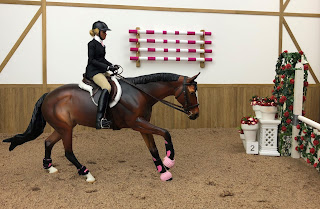