The World Through A Horse's Ears

It's been almost 12 years since I have looked at the world through a horse's ears. The last time I was on a horse was a month before my wedding. It's been a long time. I thought part of the reason was because I didn't have any boots, of any kind, and I have always felt it's a good idea to wear boots, even on a trail horse. It was almost 2 years ago that I bought my boots, and my first ever pair of breeches. Maybe having them would get me on a horse. Nope.
I have friends that own horses, I think I always have, but I have always felt it was rude to ask to ride their horse. Last August I did go and visit my good friend Marisa, and her awesome pony Bronte, but there was no riding that day since Bronte lost a shoe. That was fine, I had a great time with my pony for a day. I had had my breeches and boots for about a year and they stayed in the car. They were closer to a horse than they had ever been.
Yesterday, I finally got to get back on a horse (pony, close enough!). I had those few seconds of oh crap! that I get before getting a tattoo, getting on a motorcycle, and now apparently getting on a horse. It has been a VERY long time after all. I'd love to say that everything came back to me immediately, and maybe it did in some ways. But not completely. 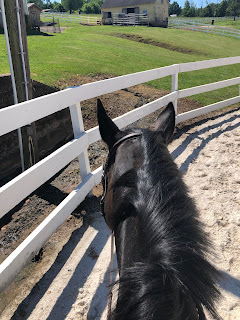 For one thing, every horse is a bit different to ride. I have spend the majority of my time in the saddle on trail horses. If I was just a rider I was likely on a horse that I could do backflips on and they would just follow the butt in front of them. If I was leading I was likely on one of the auction horses, and I could (and had) ended up with a wide variety of horses that way. Even though it had been a really long time I remembered at least a lot of things. 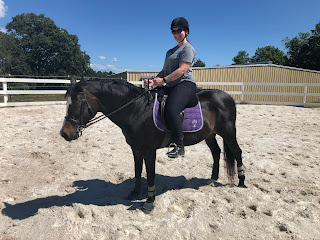 Something became crystal clear for me while I was riding. One, Bronte is super awesome whether I am standing next to her or sitting on her back. I have a vague nervousness about horses occasionally since I got kicked by one on a trail (he didn't like my horse, the kick was not aimed at me, but it did get my ankle) and one tried to kill me in a stall once. My fault, lol. But now I make sure that even when I am comfortable I am not TOO comfortable. But Bronte made me comfortable. And she made me realize how out of shape I am. 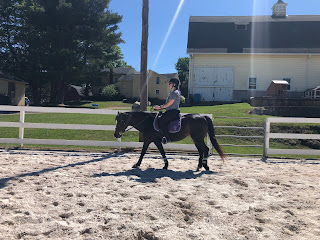 I would also kindly ask everyone who is getting ready to comment on my equitation to just stop. I didn't make Bronte mad, she got nice and warmed up while I was on her, neither of us got hurt, it's all good. 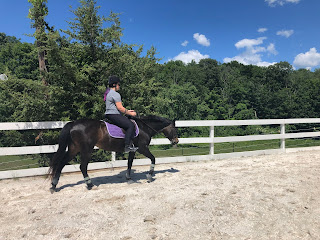 After I got Bronte warmed up Marisa got on her and had her trot for a bit. 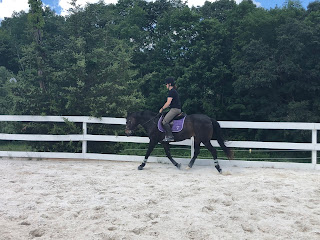 And also got her into a bit of a canter. I watched, and stretched, and I felt every muscle I had forgotten I had. I'm amazed I could get Bronte to go anywhere at all, my squeeze muscles were as weak as overcooked spaghetti. Marisa had no problem getting her to go where she wanted her to go. I need to get back into working out. I did sign up for the Breyerfest 5K after all. I don't have a lot of time to get ready for that. Likely I will walk that though. 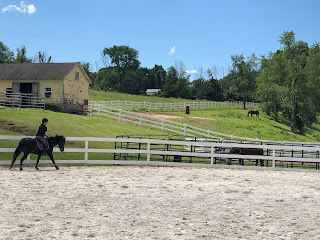 Even though I suffer from RBF (clearly) I had a really good time. I had another oh crap moment when it was time to get off. I totally remembered how, but it had been a while, my ankle was cranky, and I didn't know if I would hit the ground and my legs would give out. At least it wasn't a far drop if I did (I stuck the landing, lol!)
I spent a lot of time brushing Bronte again, and I got to ride a bit. Best of all I got to spend time with Marisa. Which is always something I enjoy. Thank you again Marisa, for sharing your pony with me! My face isn't showing it in this photo, but I had a really excellent time! 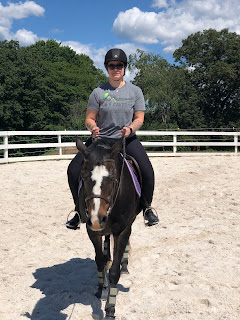