Yesterday was Travis's last day of school. I found out in the morning that it was also a half day. There is nothing quite as weird as the last day of school being on a Monday AND being a half day. Seemed like a waste to send him in. But Travis really likes Mr. Tom, who is currently his teacher.
So in the morning I got some housework done, gathered laundry and so on. In the afternoon Alex came over. She was Travis's para at school for a couple of years. Alex left to go and teach (the good ones often do that) and we haven't seen her since December. It's been a long time and they sure missed each other. 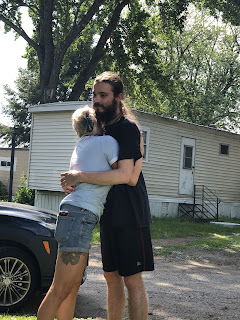 One of my favorite things about Alex, other than she is awesome and fits in perfectly with our family, is that she makes such a solid effort to engage Travis. And she is good at it. He was clearly not sure what to think about her being at our house, after all, that is not where Alex usually is, but she kept talking to him, telling their inside jokes, and pretty soon he was laughing with her like he always does. 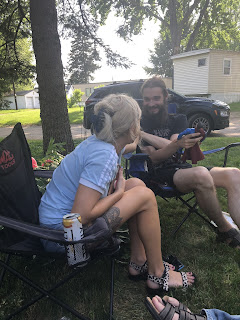 Ethan had music playing and Alex and Travis would get up to dance often. Or jump and be silly. Whatever they felt like doing. At one point Ethan leaned over and said he loved that she really comes over just for him. I almost cried because it is true. A lot of people like Travis. A lot of people enjoy spending time with Travis. Alex and Travis has a special connection and she is really Travis's friend. She likes us too, but it's Travis she comes for. And that is awesome. 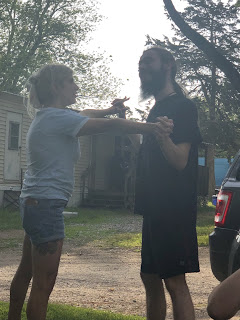 Elecktra has a new job, which is just one street over from where we live, so she stopped by after work. We had a cookout to celebrate Travis's last day of school and after we ate we played cornhole. That is one of the few games we can get Travis to play with us. And anything we can get him to do with us is awesome. When it was time to leave  Travis pulled both Alex and Elecktra into a group hug. And it was awesome. 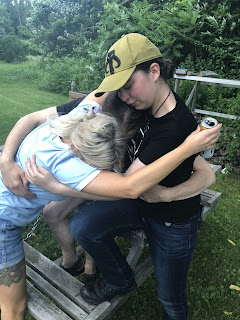 And then he posed for a photo with Elecktra. It was definitely a good day. Good food, a good friend, both my kids. Definitely a good day. I didn't get a speck of doll work done, but it doesn't matter. I did some chores and I got to see some great people. It was basically a perfect day. And now I am (maybe) ready to get back to work. 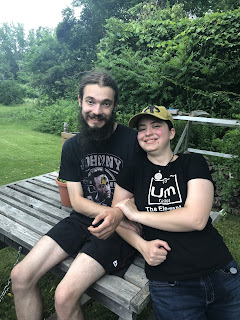 It truly looks like a perfect day! So glad that everything came together so seamlessly for you all! Congratulations to Travis!

Congratulations Travis! So happy you had such a wonderful special day with your friends Alex and Elektra. I too, like you and your mom know how special and caring Alex is, because I am blessed to be her godmother and auntie. You can see what a beautiful and loving friendship you both have. Your mom's words brought me to tears. What a beautiful write-up. So happy for you Travis have a wonderful summer 💖😊