I Will Work Harder!

Entries for the Breyerfest Best Customs Contest closed on Friday. Since then (and before then, it just got louder then) there has been discussion about a post, or several posts, where people were saying that they wished Breyer would make a novice/amateur division for the contest. The discussions have then moved all over the place (I don't know where the original was) and have turned into a lot of different things. Some of that is people saying that a lot of people don't seem to understand what the word "best" means. Or the work "contest". And "best" and "contest" in the same sentence is really hard to understand. Yes, the prizes for the Best Customs contest are valuable, rare, and sought after. I entered the contest for a couple of reasons. One, it was virtual so I could enter. And two, I wanted to see if I could do it. Not enter the contest, that I knew I could do. But I wanted to see if I could customize a horse. 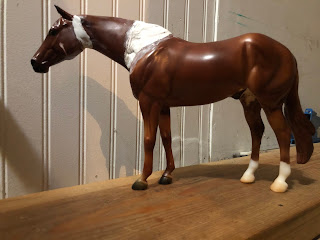 The recent discussions have brought up a subject I have been thinking about discussing, but never quite had a way to say it. Over the weekend I saw a lot of people posting that many people today expect a participation trophy. They want a prize just for trying. We have seen that a lot in NaMoPaiMo. If people don't get a prize they are mad about it, they claim there is bias (really???) and they say that people who have already gotten prizes in the past should not be able to, until everyone gets one. Stop it. It should not BE about the prize. 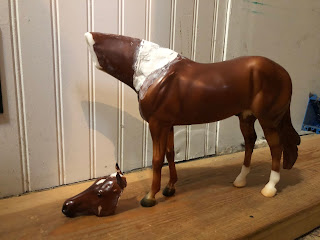 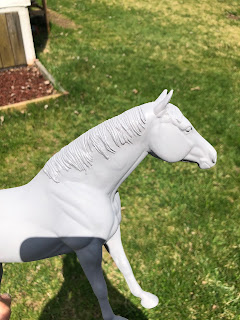 In my doll making I share A LOT of how I do things and where I get things. I do not share everything. There are people that think that is selfish of me. No, I will not give or sell you my patterns. I will not show you how I make a bendy neck (that is not actually my technique to share anyway). Will I tell you what I use to make my doll jeans? Absolutely, and where to get it (did that the other day). Will I tell you what I use for doll hair? Of course! And I will likely tell you my favorite supplier. Will I do a tutorial on how to root hair? I think I already did, but I can't remember. Will I spend all day going back and forth giving you every single step of making a doll. No, I don't have that kind of time. And you know what? Part of the learning process really is just doing the thing. I COULD hand you my patterns, give you step by step instructions, even likely video chat with you while you struggle through the seemingly endless ugly stages. But you know what? Even if you have been sewing for longer than I have been alive my patterns may not work for you. A process that makes perfect sense to me, and comes together like magic (lol, nothing works that easily!!!) might not work AT ALL for you. You might not like the materials I use, the steps I take, the order I do things in. Part of learning to do anything well is figuring out what works best FOR YOU, and then practicing until you could do it in your sleep. Your prize is knowing that you can do it, and holding the proof in your hands. 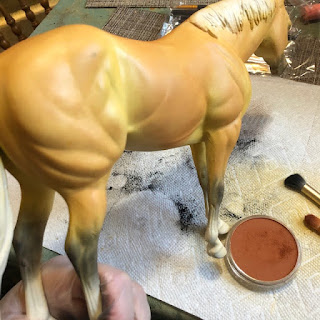 I posted a bunch of updates about my best customs contest horse as I worked on him. And I said over and over that I was not looking for advice, tips, or anything else. I was literally just sharing as I went through the process. I got completely frustrated at the beginning when my poor horse had a giraffe neck. The thought went through my mind that I could not do this. I could not make a nice horse. And then I said, I will work harder! And I got out the dremel and cut his head off. Then I had to figure out how to get it back on. Again, I shared and asked for people to not give me any advice. Not that I couldn't have used help, I had almost no idea what I was doing! But part of my goal for the best customs contest was to see what I could do. Myself. 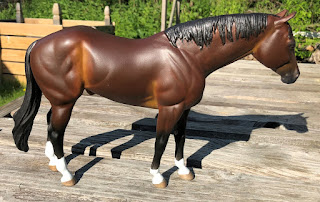 I did use tutorials, I found some to guide me through customizing, both starting and then putting the head back on. But I used them as a guide. I got down a basic idea of how to do what I was trying to do and then just jumped in and tried it. And I usually didn't follow anything exactly. The exact way they were laid out didn't work for me. But I figured out what did. I used a couple of different tutorials for my finish work. But I didn't follow anything exactly. I used Stephanie Blaylock's how to pastel a bay tutorials to know what colors she used. But when mine got too dark, or too red (something) I went completely outside of her tutorials, and colors, and tried something that I thought (hoped) might work. And it did! I am sure I could have asked for advice from any number of people and likely gotten some exact steps to take to get the horse the way I wanted him. But I wanted to see what I could do myself. 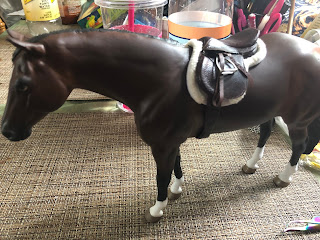 After I had a finished horse I did put tack on him that Jennifer Buxton made. When I discovered that my bridle was broken I fixed it. 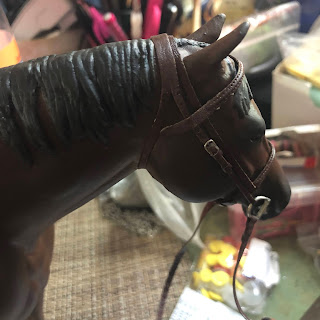 When my particular entry needed a piece of tack I didn't own I could likely have asked Jennifer to make it. She may even have had time and been willing, I don't know. But I decided to do it myself. It was a simple piece and I had ideas on how to do it. So I tried it. 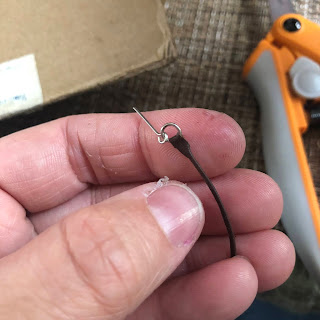 And it worked! It was not a fancy piece of tack, I don't even know that it shows in my custom contest photos, but I made it, and that was a good feeling. 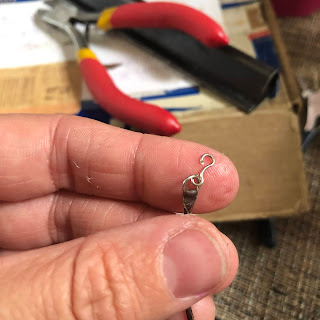 Because of Breyers rules for the custom contest I needed to have only Breyer figures in my performance entry. So I made a couple. There is not much to say about this really, it would have been fairly ridiculous for me to not make my own dolls, lol. 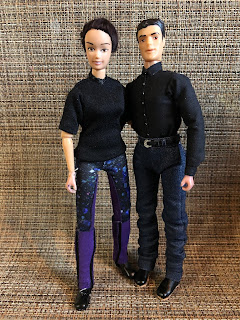 Getting back to my original point. I do not need a participation trophy. I do not need Breyer to even acknowledge the work I put into my entry, though they did receive my entry, and sooner or later (but likely July 2nd!) I will know if I am a finalist. And then if I make it that far some more waiting until I know if I win or not. I promise I will do a full reveal of my entry, after Breyer announces the finalists. 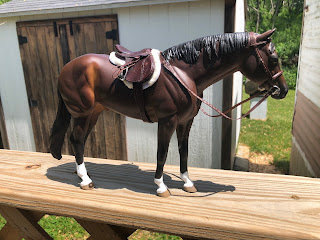 I don't actually expect to win. My horse came out really well, especially considering that I basically had no idea what I was doing, but a lot of incredibly talented people enter the best customs contest. My performance idea is really good, at least I think so, and has a lot of elements, a lot of which I made. Though 80% of the judging is still on the customized horse. In the end it's very possible I won't even make the finals (top 3), and that is OK. I decided I wanted to try to customize a horse to see if I could do it. I wanted him to be MINE, even if he wasn't/isn't perfect. I am going to just come out and say that I did an incredible job on this horse. I am already a winner, even if Breyer doesn't give me a prize. I took the time and energy to make something brand new. As Sue said, I now have a one of a kind horse. I absolutely do. Even if I used the same base horse and tried again, Just a Theory (my horse) would still be one of a kind because I doubt I could replicate him exactly. If I win the contest I will be ecstatic, how could I not be? But for me the journey was totally worth it.