About 100 years ago, or back in October of 2010, I made this Native American tack. It took me quite a long time and still did not come out exactly as I would have liked it to. I chose to paint instead of attempting to do any sort of beadwork. Scale matters a lot to me and I didn't think I would be able to keep everything in scale with beadwork. And paint is also historically accurate, so that worked. This regalia was nice, I liked it, but it was not as refined as I would have liked it to be. 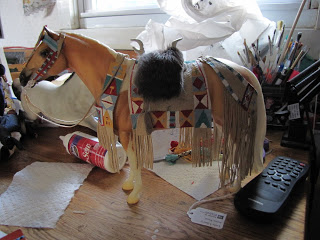 When I found this set on MH$P, it was very close to the set I made, but so nicely in scale! It was all done with embroidery! I loved the look of it. It was packed with details and looked amazing on Cranky Pants. I miss Cranky Pants. He was my Sencillo resin painted by Liesl Dalpe. 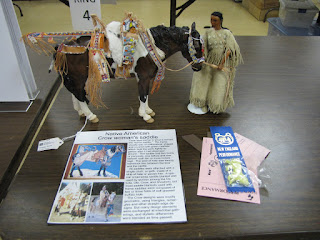 The tack also looked pretty great on Cloud Dancing, my Bold Endeavor resin. And this view shows the other side of the set and even more details. Sadly I sold Cloud Dancing because of cracking in the paint that I was not qualified to fix, I sold Sencillo and my regalia because I was broke and needed money. I ended up selling a lot of things over the years because of that. 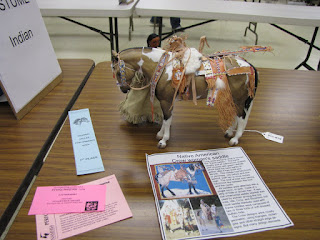 Ever since I had to sell my tack I have missed it and have been on the hunt for more. Though it seems not a lot of people make Native American regalia, at least not anything that is accurate and in scale. Since I have not been able to find what I want I figured it was time to just make it myself. I repurchased the book I had originally as part of my reference. Mostly this is a book of paper dolls, but it does have some nice pictures and a bit of history. I also purchased stirrups and a saddle tree for TWMHC. These items have all been sitting here waiting for me to finish up other projects and get started. I finished my custom horse, my photos for the Best Customs contest, so now I am a lot closer to being ready to start on a new project. Maybe soon. Though I do still need to get some photos for the Breyerfest Open show. I have some, but I also need others. So maybe that is the next thing that needs to happen. 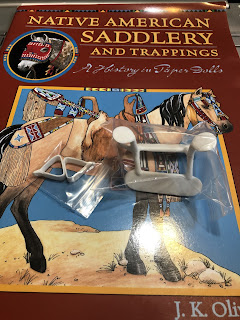 I almost feel like I need a deadline for this project. That was how I got my horse finished. It was how I got my custom contest photos finished. I am sure it will also be how I get my Breyerfest photos done. Or I will not get around to it at all and I just won't have much to show. I do think I can do a nice job at this. Especially if I slowly and carefully pick away at the project like I did with my custom horse. Maybe a few hours every weekend for as long as it takes to get it done. I would love to see if I could make something nicer than the one I originally made, and nicely packed with details. The first step will be to start. I am close to ready.