Things That Don’t Go Together

It has been sort of a long time since I have bought any tack. Last year I ordered a new western pleasure set from Mandy Clausen, for Purdy Zippin Chick, which I then blinged up quite a bit. Then this year I saw the awesome pink and black pony parade set Wendy Ward was making, and I had to try for it. It was like it was made for me. Did I need it? Not at all. Did I love it? Absolutely. Do I have some mild regrets? A bit, I really didn't need it. But it really is awesome.
So then I saw a really gorgeous western tack set that Evelyn Munday was almost finished with and was offering for sale. Did I mention it was gorgeous? Wait, I said it was Evelyn Munday, so that right there should tell you it was amazing (and if you are not into model horse art, trust me, that means it was amazing). But someone offered way more than I did for that one and I missed out. Evelyn did offer me this tack set that she was getting ready to finish up. And it was (wait for it...) completely gorgeous so I said yes, absolutely. Did I need another western tack set? Um, no. I think I already have 8 (both working and pleasure sets). That is not a lot compared to some black hole collectors, but I don't remember a time when I have used all of my tack all at once. But I no longer owned a piece by Evelyn, so I bought it. 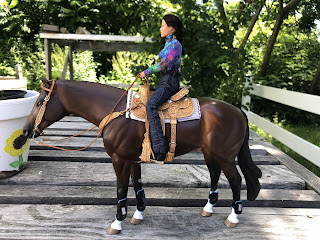 Then I was taking a brief look at Facebook (I try not to spend a lot of time there) and I saw the amazing set of jump boots that Jana Skybova had for sale. I have been trying for a set of boots from Jana for years. She had a pink and black set years ago that she took offers on, and they quickly went outside of the range I was willing to pay (notice I did not say they were too expensive? There is a difference between "too expensive" and "more than I am willing to pay") and I have seen other sets of boots by Jana but I kept missing out. This blue set was not my first color choice (clearly, my first choice is always pink) but they are amazing and I love them. And they were a straight sale, in my willing-to-pay range, and when I emailed they were still available. Did I need another set of boots? No. Did I need a pair of boots that was not pink? Most likely not, unless they had been solid black, or maybe gray. But they are awesome. And if I can manage to get pink and black ones eventually, I am sure I can sell these. 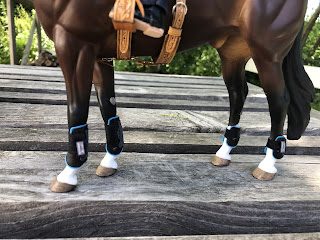 So I did not need a new tack set and I did not need a new set of boots, but I got them anyway. I have not done a whole lot of model horse purchasing in years. I did a little bit last year, but during quarantine didn't everybody? And I do finally have a bit more interest in new things. There is not really anything I need though. 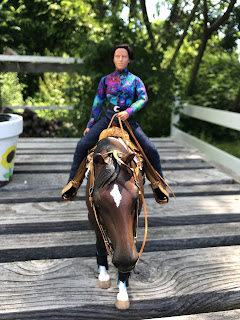 Also, since I used a faceless doll to take these pics did I need to make sure everything was great all the way around? Since I was mostly using the doll to measure stirrup length and then the point of the photos was to show off the new tack and boots, I really didn't need 360 perfection in the setup. But like Erin Corbett and her new polo set, sometimes we just do these things. Because we are performance showers. 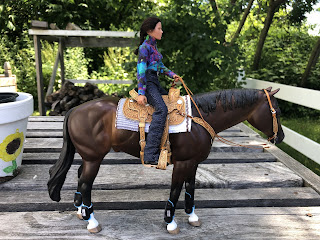 So these new items do not go together. And the color of the boots might prompt me to make a new doll for myself, but I am really glad I have these pieces in my collection. Now there are just a few more pieces, from specific tack makers, that I really need. Then there won't be anything else I "need" (probably).
Posted by Field of Dolls Studio at 11:30 PM

I would love to take them off your hands if you decide to sell them .. they are my color !!