There has been a big drop off in views on my blog again. I still have not figured out what exactly makes some people come and read. In the past I have watched YouTube videos about people saving dying channels, and often what the issue is is the title. I am bad at titles, that's all there is to it. And this isn't YouTube, it's a blog mostly about dolls. If I had a YouTube channel (an active one, I do actually have one) I would likely be posting a video once a month, or likely less. While I can sit and figure out what to type and add some photos (lol, as if the photos don't always come first!) but I can't imagine that I could come up with something to make a video about very often. I have done one, it was LONG, and editing took a LONG time. It was pretty fun though. I imagine even if I became a YouTuber I would likely get even fewer views than I do on my blog.
I really don't mean this to sound like a whining post. I know there are a bunch of people that always read my blog. Some of you read it every day, and I try very hard not to be boring for you. Sometimes I am just baffled at what gets a lot of views and what doesn't. I know if I forget to cross post a link to my studio page on Facebook I will get a lot less views. I know if I have a title that sounds exciting or controversial, I will get a lot more views. I imagine that a post with the title "heat wave" is not going to get people to click. I guess they just get to miss out on the newest round of what's happening in Anne's mostly mundane life. But you lucky people get to know.
The Pacific Northwest got some crazy record high temperatures this week. I was hearing about friends in Washington getting 110+ degree weather. That is quite hot, for sure. Massachusetts was having it's own heatwave. To be clear I want to remind everyone that 3 days of 90+ degree weather is considered a heatwave here. On Tuesday it was 99 degrees at one point. We also get humidity to go with that temperature. Which basically means by the middle of the day you drip sweat just sitting still, your hair is never dry, your clothes are never dry, and functioning is hard. The air is heavy and soupy, and overall just gross. I LIKE heat, but humidity is gross. It was fairly moderate for us, likely not Breyerfest in Kentucky humidity (which we DO get here) but everything was still a struggle. And any time I had to leave the house I thought about whining like an overtired child. I didn't, I just thought about it.

But even with the gross weather I was getting some work done. I decided that this week was hoodie doll week. I have really been enjoying working on dolls in batches. So for everyone who has been following along, one of these dolls is for an order and the rest will be for my live sale on August 14th. I likely need to make at least one more hoodie doll for my sale, or at least a casual doll, since I have some rainbow, tie dye, lightning fabric that would make some pretty amazing breeches. 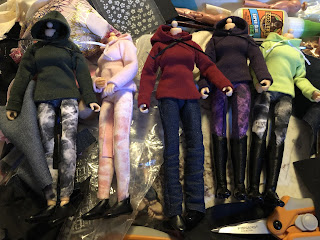 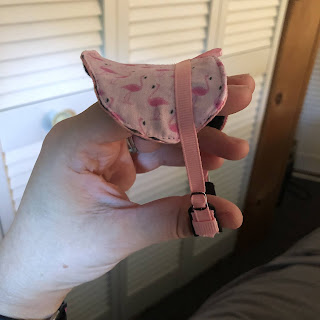 Today is the first day of the extended year program (summer school). Sort of. It's the day we go in for a couple of hours for "classroom setup" and I have no idea what that actually means. It is also the day I get to be the new kid again. I know the names of the people I am working with this summer, I know they all work at the middle school, and I know that I don't, lol. But I am this summer. They likely all know each other. And even if they don't all know each other well, you do tend to know the people who are in the same program as you, in the same building. So I will be the LHS outsider. Which only bothers me because I can be cripplingly shy if the number of people I don't know is more than the number of people I do know. Maybe the paras will at least be vaguely familiar from PDs we have done in the past. LHS and BMS have done combined PDs (professional development) for the paras in the past. Though it has been at least 2 years... anyway, new experience. I hope it will be awesome.

I have also spent more time than I care to admit wondering what drives pageviews. I'm inclined to think the preview picture is more important than the title. The only benefit of Facebook forcing me to use a relay blog is that I can choose the best picture for the post link rather than the one that comes first in the post. I also do better when I post every day, but since you always post every day (how?!?) obviously that's not a factor for you. Right now, my pageviews are significantly higher than usual. Go figure.

As if every piece of tack we make isn't that.